The law on public order offences in Ireland is mainly set down in the Criminal Justice (Public Order) Act, 1994. In the case of most of the offences under this Act, if a Garda suspects you of being involved, you are obliged to give your name and address if asked. In fact, it is an offence if you fail to do so.

You may be arrested without warrant if you fail to give your name and address. You are liable on summary conviction to a class D fine for that offence.

You may be arrested without warrant if the Garda suspects you of having committed one of these offences.

The Criminal Justice (Public Order) Act 2003 provides that, if you are convicted of certain offences under the 1994 Act, you may be excluded from a premises for up to a year. This is in addition to the penalty under the 1994 Act. 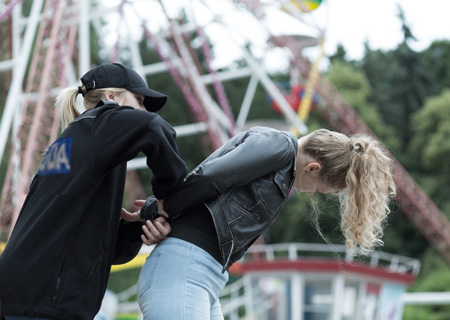 Intoxication (being drunk) in a public place

Threatening, abusive
or insulting behaviour in a public place

Section 6 of the Criminal Justice (Public Order) Act 1994 makes it an offence for any person in a public place to use threatening, abusive or insulting words or behaviour with the intention of causing a breach of the peace. A typical example of this would be where a person, by their words or actions, was likely to cause a fight with the person or persons they were insulting. It would also cover the situation where groups of youths were looking for trouble by their threatening behaviour towards other people. Again, the Garda may confiscate alcohol.
Any person found guilty of this offence can be liable to class D fine and to a prison sentence of 3 months maximum.

Disorderly conduct in a public place

This offence is concerned with what is described as “offensive conduct”.

Section 5(i) of the Criminal Justice (Public Order) Act 1994 makes it an offence for anyone in a public place to engage in offensive conduct:

Offensive conduct is unreasonable behaviour which (having regard to the circumstances), is likely to cause serious offence or serious annoyance to other people. The penalty for this offence is a class D fine.

The purpose of this offence was to deal with the types of disorderly behaviour which falls short of threatening behaviour but could nevertheless adversely affect the quality of people’s lives. A typical example of this offence would be people shouting late at night having left nightclubs where this would cause serious annoyance to local residents.

Section 23A has been inserted in the Act by Section 184 of the Criminal Justice Act 2006 and allows the Gardai to impose a fixed charge fine for disorderly conduct in a public place instead of court proceedings for this offence. In order to have the offence treated as a fixed charge offence, you must give your name and address to the Garda. Failure to do so means you may arrested without warrant and be convicted of a summary offence for which the maximum penalty is a class C fine.

If the Gardai choose to have this offence treated as a fixed-charge offence, they may serve notice on you that you will not be charged if a stated amount is paid within 28 days. The amount of the fixed charge, currently €140, is set by Regulations.